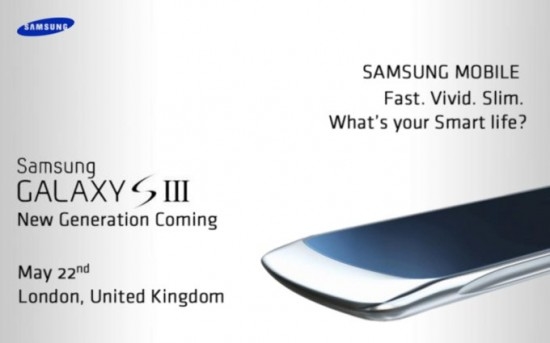 Unsurprisingly, a new image of the upcoming Samsung Galaxy S III has started making its rounds on a couple of Korean websites, tantalizing us with a glimpse of what could be the next-gen Galaxy smartphone. The image, placed on a press invite, shows of a more stylish and aerodynamic design as compared to its predecessors. The press invite itself has both date and location of product unveiling - May 22nd and London. Previously, images have been leaked before and this render seems pretty close to the photo at the bottom of the linked article. While we were initially disappointed at the fact that it was a no-show at MWC 2012, this coincides with previous reports of the phone being released in the Apr to June time frame.

The Galaxy S II has allegedly been grouped with some pretty top of the line features, including a dual-core 1.8GHz Exynos 4212 processor or a quad-core processor with LTE capabilities, 2GB of RAM, a 12-megapixel camera, and a 4.65-inch 720 x 1280 pixels Super AMOLED Plus HD display.