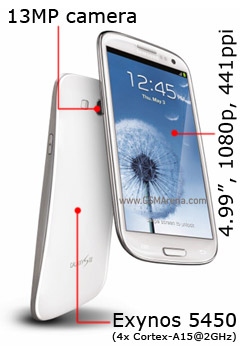 As the coming of the Samsung Galaxy S IV come closer and closer, the rumors about its specifications begin to heat up. This alleged 4.99-inch 1080p Super AMOLED smartphone is expected to have a quad-core Cortex-A15 CPU and built with a 13MP camera at the back. This is feasible since Samsung might want to step up the mobile camera game and not use the same 8MP shooter in three consecutive Galaxy S smartphones. Many reports tell that the Samsung Galaxy S IV will show up at CES on January. That we have to wait and see.