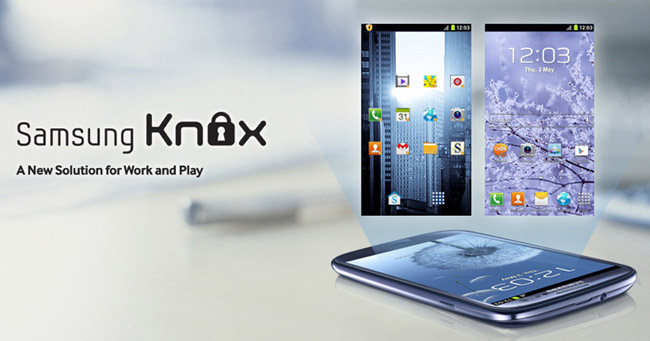 Comprehending the BYOD (bring-your-own-device) trend around the world and the security risks it may bring to companies, Samsung has introduced the KNOX software to its devices. Previously mentioned at the Samsung Forum 2013, KNOX enables a Samsung smartphone to have “two distinct personalities.” When installed, KNOX creates a partition that separates two ecosystems: personal and business. KNOX installs an icon on the device that allows the user to switch between the two environments easily.

Since October 2013 when the software became commercially available, Samsung has sold over 25 million KNOX-enabled devices and has over 1 million active KNOX users today. Samsung claims that 210,000 KNOX-enabled devices are being activated every month or equivalent to 7,000 devices per day.

Samsung’s latest version of KNOX includes new features that improve the security of the devices that harnessing it. These are:

TrustZone-Protected Certificate Management – Device-wide feature that generates and maintains secure storage for client certificates. This feature allows mobile devices to play the role of the smart card as well.

KNOX Key Store – Generates and maintains encryption keys inside the TrustZone protected environment. It allows third parties to utilize encryption for security sensitive applications and makes sure that encrypted data is protected if the system is compromised.

Real-Time Protection for System Integrity – Real-time monitoring that both detects and prevents any unauthorized modifications to the kernel code, critical kernel data, and system partition.

TrustZone-Protected ODE – Encrypts the data stored in the device through the TrustZone-protected encryption key, which can be disabled at the detection of system integrity compromise.

Enhanced Generic Framework of KNOX - Supports Per-App VPN functions for SSL VPN solutions such as Juniper, F5, and Cisco while previously supporting them only for IPsec VPN.

Some of the new features on KNOX are brought about by Samsung’s partnership with Microsoft and third-party containers containers like Good, Fixmo (SafeZone), and MobileIron (AppConnect). The new split-billing feature became possible through partnerships with carriers like 3 Hong Kong.

Apart from large enterprises, small and medium businesses can also gain benefits from Samsung KNOX. New KNOX features that will benefit SMBs include:

Marketplace – A one-stop shop for SMBs to find, buy, and use KNOX and enterprise cloud apps in a unified environment. The app store includes a comprehensive catalogue of business applications including KNOX and 140+ cloud apps. Moreover, the store offers customizable bundling for customers to buy multiple apps in a custom bundle and consolidated billing to allow customers to combine multiple products into a single invoice.