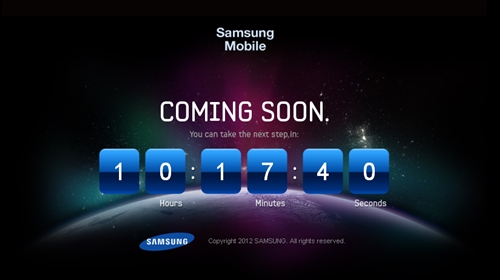 Samsung is set to generate more media buzz for its hotly anticipated Galaxy S III with a countdown timer on the teaser site.

According to Android Community, the teaser site, tgeltaayehxnx.com, is made up of the sentence, "The Next Galaxy". In addition, a look at the page source reveals the following quote:

"Discover how Samsung is about to challenge the way you view the GALAXY once more."

While Samsung has kept much of the Galaxy S III under wraps, Amazon Germany might have jumped the gun with a pre-order page for the phone going live before its official launch in London on the 3rd of May. The device is listed with the following specs and price:

Most of the specs mentioned are in line with what was reported in a video leak last week except for the screen size and camera. The alleged device is mentioned to be equipped with a smaller 4.6-inch display and an 8-megapixel camera module.

Whatever tricks that Samsung has up its sleeves at the end of the countdown timer on its teaser site remains a mystery. Stay tuned for more updates as we will "take the next step" with Samsung in about ten hours.