Screenshots of the new Samsung Galaxy Altius smart watch have been leaked. This is according to The Verge who reported that they were obtained from a South Korean message board. 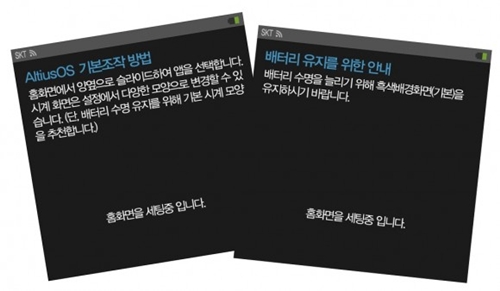 The topic of the thread, which the pictures were retrieved from, dealt with how well positioned the new smart watch is, rather than to question the existence of the watch. Hence, it does lend some weight to the possibility of its existence. The screenshots of its user interface underscore the relation it has with the new Samsung Galaxy S IV. Both of them share the same codename of Altius and this may point to a new family of devices Samsung will market under this brand name. The publication also noted the version of the OS is AltiusOS beta2.

According to The Verge, only 1.5 percent of the device’s 235MB storage capacity is in use; this seems to imply the smart watch is designed for tandem usage with an accompanying device like a smartphone in order to supplement its meager usable storage capacity. The logo of carrier signal seen in the screenshots belongs to SKT; which is a mobile service provider in South Korea, indicating the smart watch can be paired with a data plan for connectivity.

If the smart watch is launched together with the Samsung Galaxy S IV on 14 March, the South Korean company may just beat Apple to the market as the latter is also working on its smart watch. Do watch this space for more exciting updates.