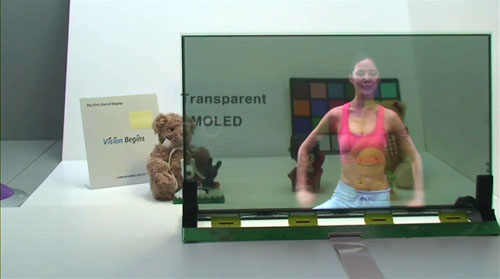 After showing it off at this year's CES, South Korean tech giant Samsung has announced that the transparent 46-inch panels they showcased would now go into production.The scenario where this sort of transparent display can act as both a display and a window at the same time, are pretty abundant.

That's according to Digitmes, which reported that Samsung's 22-inch transparent displays are sought after by the retail sector, or basically anyone who wants to add a whiz-bang factor to their displays.

Younghwan Park, senior vice president of LCD marketing, Device Solutions, Samsung Electronics, said, "Transparent panels, an exciting application of next-generation display technology, have unlimited potential to change our viewing habits over the next several years. As a strong supporter of the transparent display market, Samsung plans to develop this technology into a new growth engine for our LCD business."

Digitimes also revealed that the upcoming 46-inch transparent LCD panels will have a contrast ratio of 4500:1 with 1366 x 768 pixel resolution and 70% gamut. Samsung also revealed a notebook that sports this transparent display at CES, and we must say it looks stunning.