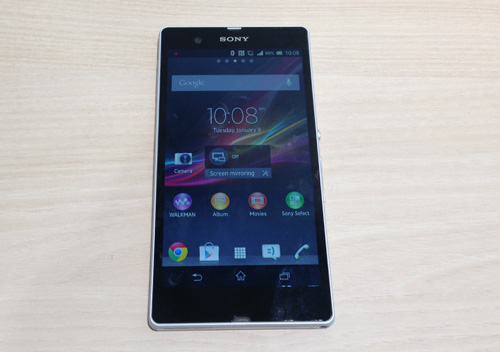 Sony Mobile Communications just unveiled its latest flagship device, the Xperia Z today at CES 2013, which does not come at a surprise since the device has been leaked quite regularly over the past few weeks. Bringing the best of Sony's innovation in various entertainment sectors such as TV, imaging, music, film and gaming, the Xperia Z certainly has one of the most powerful suite of features to date.

The Sony Xperia Z boasts a 5-inch Reality Display powered by Mobile BRAVIA Engine 2, which is claimed to deliver a superior viewing experience with its sharpness, brightness and clarity. Its display is also scratch resistant, thanks to the use of tempered glass and anti-shatter film.

Similar to the ASUS PadFone 2, LG Nexus 4 and HTC Butterfly, the Xperia Z is powered by a Qualcomm Snapdragon S4 Pro quad-core 1.5GHz processor and 2GB RAM. At launch, you will find Android 4.1 running on the Xperia Z. It will be updated to Android 4.2 shortly after the launch.

Sony takes mobile imaging to the next level on the Xperia Z by equipping it with a 13-megapixel fast capture rear camera with Exmor RS for mobile, the world's first image sensor with High Dynamic Range (HDR) video for smartphones. According to Sony, the Xperia Z has the capability to capture impressive images under different kinds of conditions especially against strong backlight.

The 2,330mAh battery within the Xperia Z should offer a talk time of up to 11 hours (3G), music playback of up to 40 hours and video playback of up to 5.5 hours. Sony also incorporates a Battery STAMINA Mode that is said to increase standby time by at least four times by disabling battery draining apps when the screen is turned off, and starting them up again when the screen is back on.

Despite packing the latest technologies and hardware, the Xperia Z comes in a sleek chassis of just 7.9mm. It also has the highest levels of dust and water resistance (IP55 and IP57) to ensure that it can survive accidental spills. Other specs include NFC, Bluetooth 4.0, and 4G LTE support alt

The Sony Xperia Z will be available in three colors: black, purple and white. It is slated for a global launch in Q1 2013.