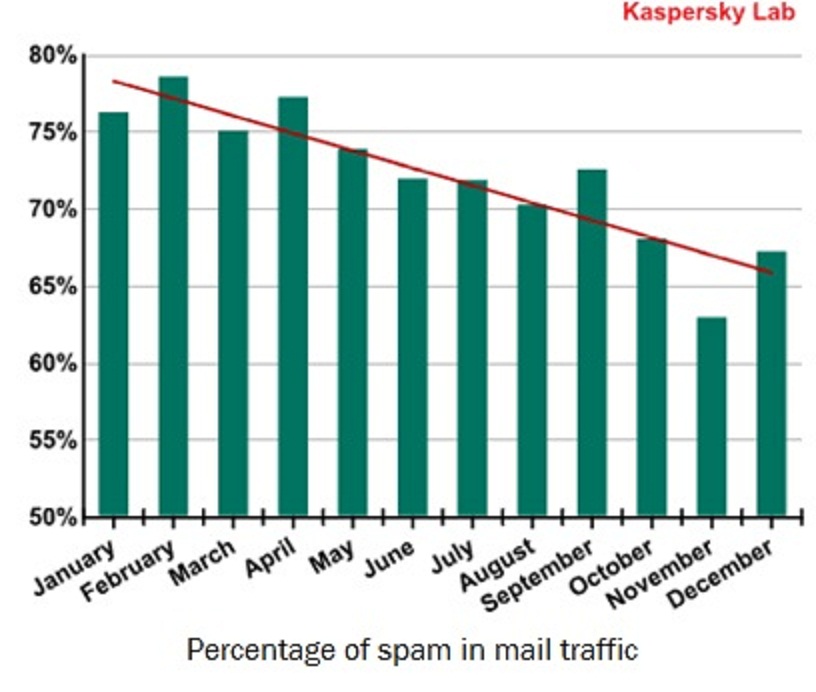 According to the Spam Report 2012 from Kaspersky Lab, the preceding year saw a decrease in levels of spam, thanks to the increased adoption of anti-spam protection among consumers worldwide. As of the end of 2012, spam percentage ended at 72.1%, lower than what was recorded in 2011. Compared with the figures in 2010, spam levels also decreased significantly due to the closure of several botnet centers and pharmaceutical affiliate programs. The mandatory use of domain key identified email (DKIM) by email providers also helped a lot in reducing global spam levels. 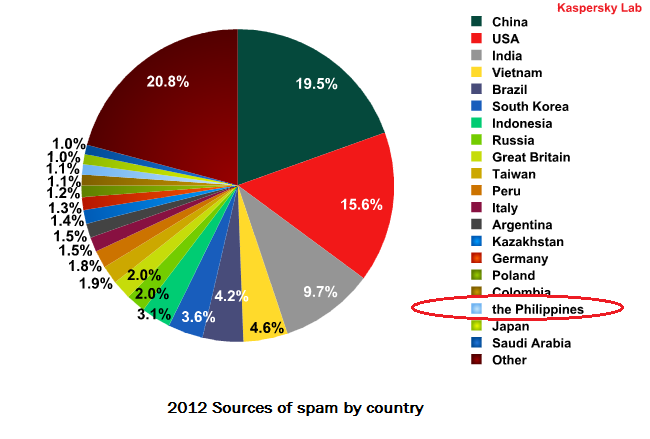 Kaspersky Labs’ report also reveals other interesting information on global spamming trends. In 2012, China became the top source of spam emails, a position which was occupied by India in 2011. Interestingly, the Philippines is on the top 20 list, contributing less than two percent of spam. With China being on top, 2012 also saw Asia as the primary source of spam, followed by North America, in terms of regional perspective.

Kaspersky Lab, a leading secure content and threat management solutions developer, recently released a report saying the decrease in spam in 2012 was caused by a heightened use of anti-spam protection among Internet users worldwide.

2012 also saw a comparably huge decline in spam volumes than in 2010, reporting with 82.2%, and in 2011, which reported 80.3% spam volumes. The shuttering of several botnet command centers and pharmaceutical affiliate programs in 2012 also contributed to the spam volume decline.

Apart from the use of anti-spam applications, another reason for the decline of spam is the use of mandatory DKIM (domain key identified mail) signature policies by email providers.

DKIMs are digital signatures that verify the domain from which emails are sent.

Darya Gudkova, Kaspersky Lab Head of Content Analysis & Research said that the percentage of spam decreased over the course of the year, and during the final three months of 2012 the figure remained below 70%.

But even with the decline of spam volumes in 2012, there were some major changes in terms of the source country of spam.

China was suddenly thrust into the top of the list of spam sources for 2012, contributing 19.5% of all unsolicited email. This is unprecedented as China was not even in the top 20 spam sources in 2011, which was topped by India then.

The entry of China in the top list already increases Asia’s ranking as the primary regional source of spam, rising 11.2 percentage points for 2012, finally contributing 50% of all spam. North America took second place with 15.8% last year.

Kaspersky Lab also reported that despite the decrease in overall percentage of spam in mail traffic, the proportion of emails with malicious attachments fell only slightly to 3.4%.

The company said this is still a significantly huge percentage since it only reflects emails with malicious attachments and not spam messages containing links to malicious websites.

These three malware were designed to steal user account information such as usernames and passwords. Fraud.gen and Zbot specifically targeted passwords from financial and payment systems, while Tepfer stole other types of passwords.

The volume of spam from the US and China grew substantially in 2012 and even if anti-spam laws were passed and botnets were shut down, spammers were still taking advantage of powerful computing resources in both countries. These computing resources were then used to build new botnets in those countries.

Kaspersky Lab also reiterated in its report that the volume of malicious emails remained high throughout the year. Malicious users are copying even broader range of legitimate notifications. 2012 also saw the spread of malicious programs that steal usernames and logins, focusing primarily on account information for financial services. Nevertheless, creators of these malicious programs also want passwords from social networks, email accounts, and other services.

In this situation, Kaspersky Lab reminded Internet users to keep safe: when you receive an email, make sure that it was actually sent from the resource that it claims to be. Never click on links in suspicious emails, and remember, it is critically important to update your software regularly.

"This drop is the result of a gradual departure of advertisers from spam to other, more convenient and legal means of promoting goods and services. However, that doesn’t mean spam is headed the way of the dodo anytime soon: malicious spam, fraud, and advertising of illegal goods cannot simply or easily migrate to legal platforms, due to their own inherently criminal nature. We expect that the decline in spam volumes in 2013 will be negligible at best," Gudkova said.