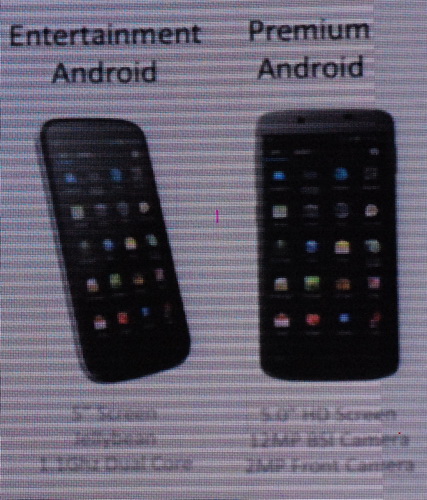 At Starmobile’s first dealers convention held in Sofitel Philippine Plaza Manila in Pasay City last night, Starmobile President Michael Chen revealed some of the company’s exciting plans in the coming months. After establishing itself as a young and aggressive mobile phone player in the local market this year, Starmobile aims to delve deeper into the competition by introducing Android smartphones that feature larger displays next year. Slides that we got Tuesday night reveal that Starmobile will welcome 2013 with two new smartphone models packed with a 5-inch display. The first model falls under Starmobile’s entertainment-centric lineup and is equipped with a 1.1GHz dual-core processor. The other, labeled as a Premium Android smartphone, has 12-megapixel main camera and a 2-megapixel front-facing camera. Mr. Chen specified that this smartphone will employ a BSI (back-illuminated sensor) camera, allowing users to capture good photos even in low-light settings. Other smartphones that are known using BSI camera include the Apple iPhone 4 and the HTC EVO 4G. The two Starmobile smartphones will run on Jelly Bean. While the folks at Starmobile did not name the two devices, we’re pretty sure that their moniker will start with letters “D” and “E”, taking into account the company’s alphabetical naming convention. Starmobile has already launched the Astra and the Bright, whereas the Crystal is slated to come out next month. With the imminent arrival of these smartphones from Starmobile, do expect a more cutthroat competition in the 5-inch smartphone category next year.