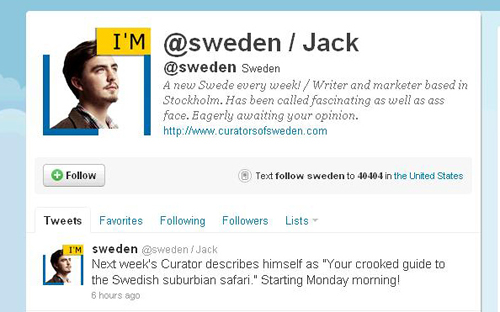 Sweden definitely believes a nation is its people and has decided to hand over its official Twitter account over to its inhabitants. A new Swede from a different walk of life will be given control of Sweden's twitter account every week and it is hoped that the move will showcase the people of Sweden on a global stage.

The current person tweeting on behalf of Sweden is a Twitter user named @kwasbeb. Upcoming Swedes scheduled to take over in the coming weeks include an editorial writer, a founder of an advertising agency with his own farm, a suburban writer, a priest, a teacher and a coffee-drinking trucker lesbian. Instead of dry and boring government spouted lines, Sweden has taken the bold step to let its citizens step forward and represent the country.

Social media is a relatively new platform and governments around the world have been cautious to use the new medium. Unlike older formats, the new modes of communication offer leeway for experimentation for those brave enough to try. Sweden's democratic approach to its official Twitter feed is an excellent window into the lives of its people. However, only time and hopefully the prudent usage by the curators will tell if the experiment is a success.

Source: Curators of Sweden via Techland and The Next Web