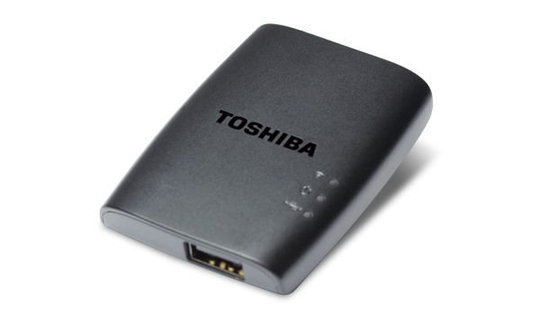 Turn every hard drive you have into a wireless one with the new Toshiba Stor.e Wireless Adapter - a 2.5-inch adapter that measures just 48 x 63.5 x 10mm, weighs 24g, and has a transfer rate of up to 300Mbps. Toshiba says up to eight users can connect to a single Stor.e Wireless Adapter at the same time, and that the internet connection is never interrupted, so you don’t have to stop surfing while you access your data. Support is available for Macs and PCs, and free apps will be available for download for Android and iOS devices.

So for those who thought coughing up for a portable wireless drive like the Seagate Wireless Plus drive is going to be an expensive proposition, Toshiba's Store.e Wireless Adapter will cost significantly less and allows you to still use your existing drives. At the time of publishing this news piece, official pricing information was not made available yet.

Also announced, is a 5TB Stor.e Canvio Desktop External Hard Drive, which Toshiba will ship with a copy of NTI Backup Now EZ, but the release date has yet to be announced. The Stor.e Wireless Adapter will be available May 2014.