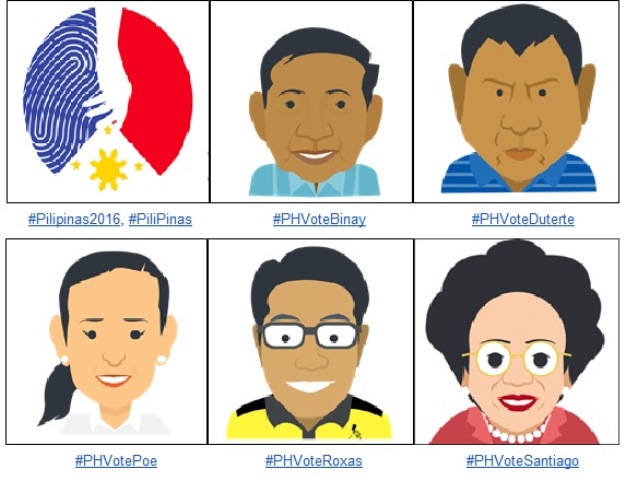 Twitter and COMELEC officially launched exclusive #PiliPinas2016 and presidential candidate emojis for the Philippines’ upcoming national elections, geared to inspire Filipinos to engage and discuss their opinions via Tweets on important topics that will shape their voting decision.

By using hashtags #PiliPinas2016 #PiliPinas when composing a tweet, a special emoji will appear. pic.twitter.com/WicSsN1hJS

By using #Pilipinas2016 or #PiliPinas hashtags when composing a Tweet, a special Twitter emoji will appear in the sent Tweet: a hand dropping a ballot symbolizes the participation of every Filipino in this very important political exercise complimented with a red background that stands for the affirmation of his choice, juxtaposed with a blue thumbmark that underscores the deeply personal nature of every vote. Aside from the election hashtags, emojis of the presidential candidates will also appear in your Tweet by using the following hashtags for each candidate: #PHVoteBinay, #PHVoteDuterte, #PHVotePoe, #PHVoteRoxas, and #PHVoteSantiago.

“Twitter has always been the go-to-platform for people to engage in live, public conversations about their interests, local culture and events taking place in the real world. Even more so for the upcoming #PiliPinas2016 election where we see witty, passionate election-related conversations every day between Filipino candidates, voters and citizens,” says Twitter Head for Media Partnerships in South East Asia, Pratiksha Rao.

“We’re officially launching Twitter emojis for #PiliPinas2016 and the five presidential candidates to make the #TwitterElection conversations more fun and engaging. We hope these emojis will help facilitate the spirit of nationalism and participation among the Filipino electorate — not only to voice out their opinions, but also to listen to a wide range of viewpoints on Twitter to make a more informed voting decision," Rao added.

Meanwhile Commission on Elections (COMELEC) Chairman Andres Bautista has expressed his gratitude on Twitter’s support on the #PiliPinas2016. “We are positively overwhelmed by the extent of support that Twitter provides the Filipino community for the upcoming national elections. Through this platform, we have seen how lively the discussions are now about the election. And with this new development, we hope that more people will start participating and get themselves involved in this important moment for our country’s future.”

The emojis are available to all Twitter users starting last March 4, giving Filipinos a fun and more expressive way to share and be involved on election-related topics with fellow Filipinos, supporters, campaign runners, and candidates nationwide. Twitter has partnered with Rappler in designing the special emojis.