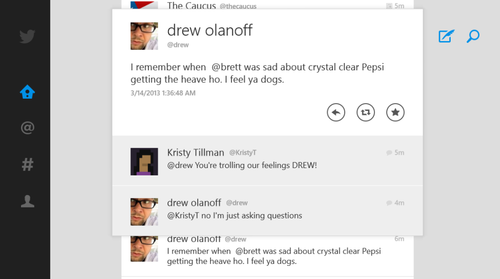 Finally, the Twitter app for Windows 8 and Windows RT devices has arrived. This version of Twitter is crafted specifically for Windows 8 and Windows RT devices with functions that work best for both systems such as Windows 8 Share and Search charms (to let you Tweet and share on any app), snap view (to let you adjust the size of the Twitter app and use other apps along with it), and live tiles and notifications (so it is always on-view not matter what other app is running).

Twitter has launched specific versions of this social networking app for most major platforms but this is the first time that Twitter appeared on a Windows OS. Even way before, Twitter has been pouring efforts to provide consistent experience across as many platforms as possible. This release is a major leap for Twitter.