VMware Introduces New Platform for Enterprise Database as a Service

VMware Introduces New Platform for Enterprise Database as a Service 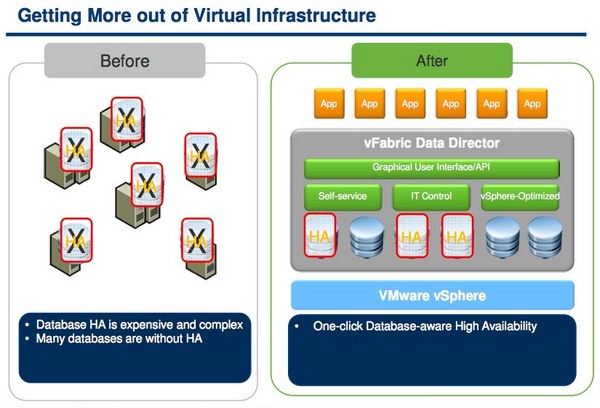 MANILA, PHILIPPINES - At VMworld 2011, VMware announced a new database provisioning and operations solution designed to deliver a database as a service model for the enterprise. An extension of VMware’s Cloud Application Platform strategy, VMware vFabric Data Director will give IT the ability to control and manage a growing set of heterogeneous databases through policy-based automation, while streamlining application development via a self-service provisioning model for developers to rapidly access the database services needed for modern applications. Built on VMware vSphere, vFabric Data Director will also extend the benefits of virtualized infrastructures to the database tier, optimizing resource utilization for increased operational efficiency and cost savings.

Applications in the cloud era are fundamentally different than those written for previous client-server or internet architectures. Increasingly, modern applications are written in high productivity development frameworks and delivered via dynamic virtual and cloud infrastructures. Today’s applications must also account for a wider variety of web, SaaS, social and mobile platforms and exponentially higher volumes of real-time data.

To address this changing nature of applications, VMware is investing in a complete cloud application platform, including innovative developer frameworks, application and data services and new cloud based Platform as a Service (PaaS) delivery models that promise to significantly increase developer productivity and operational efficiency while enabling access to the broadest range of infrastructure services from VMware, third parties and the open source community. VMware has significantly advanced the modern cloud application platform, extending the Spring community of Java developers with key framework innovations, delivering a core set of cloud application services including messaging and in-memory data services, introducing Cloud Foundry, the industry’s first Open PaaS and leveraging the PaaS environment to embrace multiple modern frameworks and languages including Erlang, JRuby, PHP and Python as well as data services such as Neo4J.

With exponential growth in data to support today’s applications, enterprises increasingly suffer from “database sprawl”, the proliferation of under-managed, under-secured and even unknown databases across the IT organization. Manual operations for this growing set of databases restrict the ability of developers to rapidly access and provision data services for their applications. vFabric Data Director will establish a policy driven model for driving consistent security, data protection and resource consumption across an enterprise’s database portfolio. Automating routine database operations via standardized policies and best practices will enable database administrators to focus on higher value initiatives while laying the foundation for a self-service database model for developers. Through a powerful web-based portal, developers will be able to leverage vFabric Data Director for self-service access to a broad range of database services to serve their specific needs.

“Enterprises must support hundreds or even thousands of applications to meet growing business demands, but this growth is dramatically driving up the cost of running and managing the databases under those applications. The stress this puts on the IT budget makes it harder to provide databases to support new requirements such as Web 2.0 applications or other emerging collaboration solutions or even to support more mundane uses such as increased application testing. A new emerging option called database as a service (DaaS) hosts databases in the cloud and is a good fit for some new apps.” Database As A Service Explodes on the Scene, Noel Yuhanna, Forrester Research Inc., July 31, 2008.

“Making it easier for Tier 3’s Enterprise Cloud customers to manage the complexities of their data is core to our Database as a Service strategy,” said Jared Wray, Founder and CTO, Tier 3. “VMware vFabric Data Director overcomes many of the challenges our customers face in moving to self-service databases in the cloud and represents a real step forward in technology that empowers Database as a Service.”

The first database supported on Data Director is VMware vFabric Postgres, a new offering from VMware based on and fully compatible with PostgreSQL. Fully ACID and ANSI-SQL compliant, PostgreSQL is an enterprise class database, with a long history of mission-critical customer adoption and support from a vibrant open source community.

"Sybase, an SAP Company, and VMware have a common vision that customers’ new application demands and cloud deployment pursuits are changing the database market from both an architectural and delivery perspective. VMware vFabric Data Director will help deliver both traditional as well as new database technologies as a service for enterprises. We look forward to working closely with VMware as a preferred partner to deliver Sybase Adaptive Server Enterprise a leading database solution through VMware vFabric Data Director," said Dr. Raj Nathan, Executive Vice President and Chief Marketing Officer

"The introduction of VMware's vFabric Data Director represents a powerful innovation at the intersection of cloud, virtualization, and data. We are thrilled to have collaborated with VMware, and excited about the role that the vFabric Data Director technology plays in our enterprise data cloud product offering: Greenplum Chorus," added Bill Cook, President, Greenplum - a division of EMC