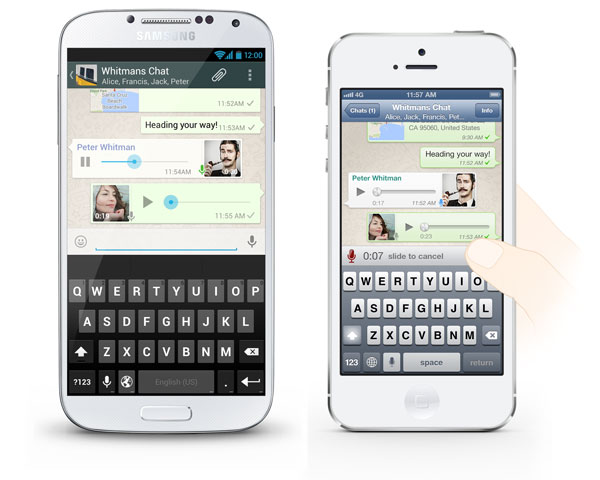 WhatsApp recently told All Things D that it now has more than 300 million active users across the globe. However, it also mentioned that WhatsApp will also receive a significant upgrade that adds a push-to-talk feature. The new feature will be made available to WhatsApp users on all supported platforms (iPhone, BlackBerry, Android, Windows Phone and Nokia's Symbian) by the end of this week.

Using the voice recording feature found in Facebook's Messenger app as an example, Koum showed that it took three taps to send a voice message. With WhatsApp, it only requires one tap. Users simply push to record, and release to send. If a user decides not to send, a swipe to the left will delete the unwanted voice recording.

Asked about competition from significant Asian players like WeChat and Line, which have now expanded into platforms for games and other apps, Koum said he had no interest in anything that smelled like an advertising business. (Platforms and ads aren’t necessarily correlated, but they often come together.)

During the Santiago de Compostela train disaster in Spain last month, a woman buried in rubble was able to text her husband her whereabouts using WhatsApp. It became part of the larger narrative around the tragic, deadly event.

Back at the WhatsApp office, Koum was indignant as he asked, “Can you imagine if that woman had to watch an ad before she wrote to her husband?”