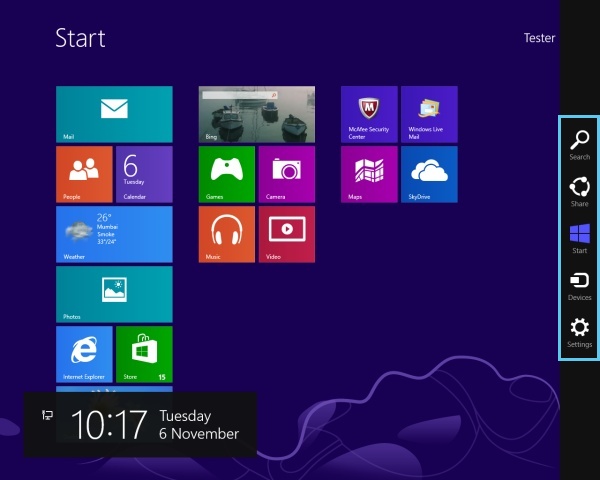 It looks like Microsoft is stepping back from its unified Windows 8 vision for the next major version of Windows, currently codenamed Threshold, by removing the awkward Charms menu. The overlay is accessed by swiping in from the right side of the screen, or for non-touchscreen users, moving their mouse to the corner of the screen, to access search, share, the Start Screen, devices, and settings. While Charms were quite useful for touch machines, the implementation for mouse and keyboard was never ideal.

Winbeta reports that current builds of Windows Threshold, which is expected to be named Windows 9, do not include the Charms bar. ZDnet also reports that "Metro-style" Windows 8 apps will get title bars that include some menus with the Charms components, and developers will need to add features to enable the share Charm. The change is likely related to the fact Microsoft is making its Windows 8 apps more flexible, running in floating separate windows on the desktop like traditional apps. This should greatly improve the mouse and keyboard experience for these apps, something Microsoft has been gradually trying to fix in Windows 8 with various updates.

Microsoft will also be adding a virtual desktops feature to Windows 9. Apple’s OS X has long supported virtual desktops, but Windows users have always had to settle for third-party alternatives to enable similar functionality. Windows enthusiast site Neowin first reported the addition, noting that virtual desktops will allow Windows 9 users to create separate active desktops and switch between them from a button on the taskbar. Virtual desktops shows Microsoft is serious about pleasing existing Windows users with its renewed focus on the desktop.

A preview version of Windows 9 is likely to be made available later this year, with an expected release in early 2015.