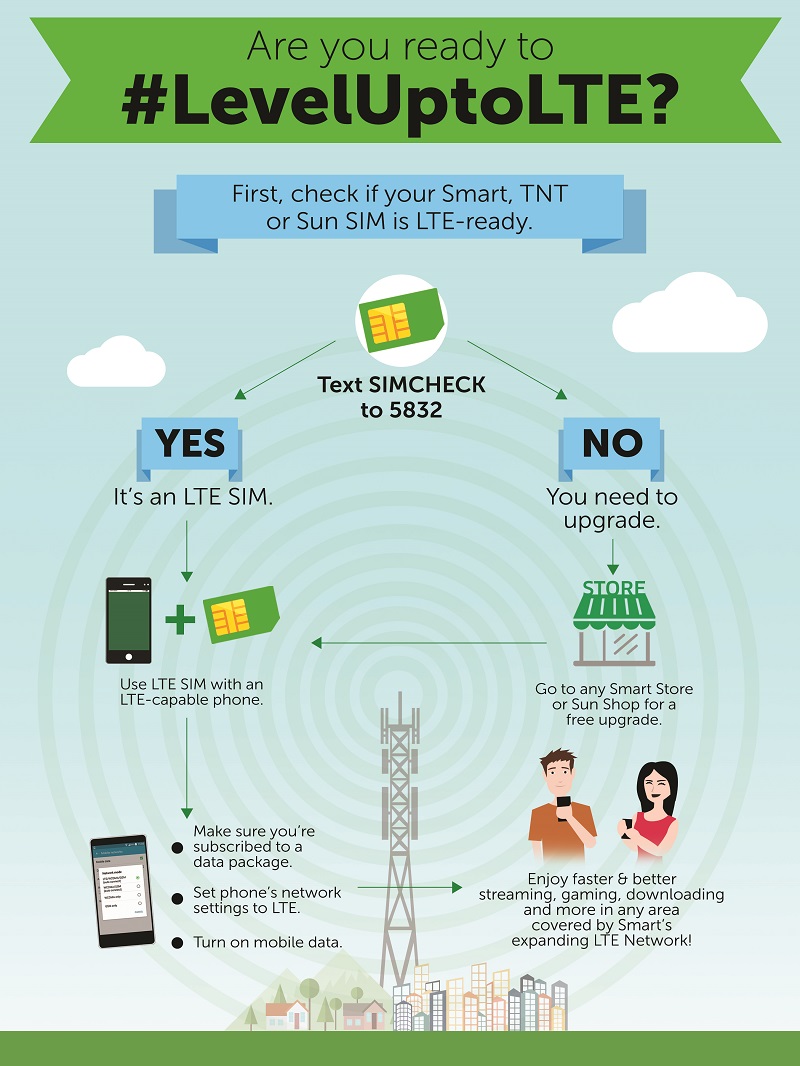 Smart is in the middle of a three-year program to expand its LTE coverage in order to deliver superior mobile data service to customers. Smart’s LTE network currently supports frequencies at 700MHz, 850MHz, 1800MHz, and 2100MHz.

If ever you are wondering if your smartphone’s SIM is LTE-ready, for customers of PLDT's wireless subsidiary Smart Communications, Inc. (Smart), the answer is simply a text away with the launch of its new LTE SIM check program via SMS.

To check if your SIM is already on LTE, Smart prepaid and postpaid subscribers can text SIMCHECK to 5832 for FREE. Customers that are not yet on LTE SIMs are then urged to go to the nearest Smart Stores to upgrade their SIMs for free and also retain their number.

“To really benefit from the LTE network that we are now rolling out, our customers must have an LTE-capable smartphone with an LTE SIM,” said Mario G. Tamayo, PLDT and Smart Senior Vice President for Network Planning and Engineering.

“We are reminding people about this point because it is quite possible that some of our customers are using non-LTE SIMs in LTE handsets, or it could be the other way around — they could be using LTE SIMs with non-LTE handsets. We need to get all three elements together — LTE network, LTE SIM, and LTE device — to get the best experience.”

Smart LTE speeds were recently cited by wireless research firm OpenSignal as the fastest in the country at 10.6Mbps, noting that the improvement in speeds is because of Smart’s massive nationwide rollout.

Smart has already finished its LTE rollout in the country’s top urban hubs Metro Cebu and Metro Davao, in the island resort of Boracay, and in Rizal province. It is currently underway in Metro Manila and in key cities.

Smart projects that by the end of 2018, more than 90% of the country’s population will have access to Smart’s LTE network.

This comprehensive network modernization and expansion program is at the core of the PLDT group’s digital pivot. Smart’s network rollout took a big bulk of PLDT’s ramped-up capital expenditure program of PhP 42.8 billion for 2016, which included the utilization of the new frequencies freed up with the acquisition of San Miguel Corporation’s telco assets.